So, the season is nearly at an end and the autumn walks went very well, with lovely people joining in. Thanks to everyone who came on my hikes this season and I look forward to seeing you again next year perhaps.
Tomorrow, my helper, Richard and I are off to Glossa to start work on reopening the old lighthouse path. After trying in vain to get permission to cut the fence there, I’ll just cut it and wait and see if anything happens!
Thanks to the SCAN budget, I’ve invested in a pair of battery operated lobbers. Since the RSI, I can’t cut anything thicker than a twig!
A SCAN volunteer has errected two styles down in Djilili. Images will be posted soon. Big thanks to Mike.

In case you are already on Skopelos or planning to come shortly, I have arranged the following:
Glossa Area hike – Wednesday 16th Sep – meet at Glossa school 11am
Coast to Coast – Saturday 20th Sep – meet Internet Cafe (near Bardom) 9.30am
Town Walk – Tuesday 22 Sep – meet by seat next to the Kiosk op central car park/bus station 11am
All Welcome
Other hikes will be arranged until the end of September

I’ve been informed that Walk 27, Keramoto Cove in Glossa, is impassable. I’ll let you know when I’ve had a change to inspect it. 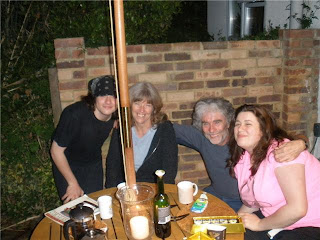 Rob: Charing Cross Hotel please
Taxi Driver: You just been to M&S then
Rob: Yes
Taxi Driver: They’re about the one thing left that’s British. This country’s gone to the f****** dogs. That f***** Labour party, just a bunch of w******. The country’s run by limp-wristed, Guardian reading, muesli crunching, couscous sucking, plastic sandal-wearing, tree hugging, bicycle clip tossers….[two minutes on immigrants)…and so I have to work 8 days a week, 400 days a year…(two minutes on the reason for the move of the cross-channel train station to St Pancras – the French refuse to travel to Waterloo)… metrication….(two minutes why its normal human behaviour to drive on the left – medieval jousting explains it – and everyone else has it wrong)…………………

Walking up Charing Cross Road noticed something else that has changed – some of the bookshops for which the road is famous – have disappeared. See an article in a shop window written by the actor Simon Callow talking about the bibliocide ( a new word on me) on Charing Cross Road and, sure enough, at least seven book shops – including all the art shops – have gone. The only redeeming feature is that what used to be the world’s worst bookshop – Foyles – has completely changed and won Best Bookshop in London in 2008. Despite this reduction in bookshops, it still took me (as usual) nearly a couple of hours to get up to Oxford Street.

The British are even more depressed by the recession than Kiwis (much more) but the hot subject is not that, but a TV programme – Britain’s Got Talent – a sort of talent show with some spectacularly weird, and useless performers. The likely winners include a fat greek man and his fat greek son who do greek dancing. The other news is of all the MPs fiddling their expenses. So the international crisis fades into the background and the British plod on. Some things never change. 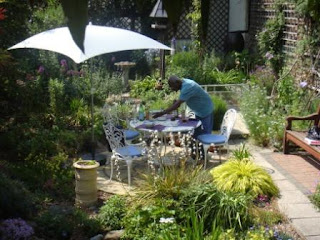 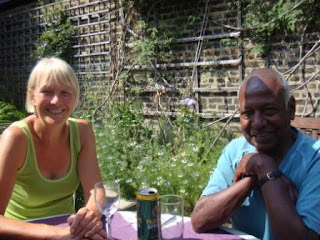 I’ve been wanting to do a pictorial blog for some time, to share with you my collection of postcards of ‘old Skopelos’. 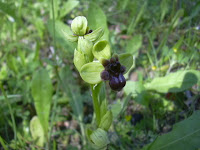 At last have been able to get to work and start path clearing. It’s been way too wet up until now. So the way from Moutero church, the spring and up to the dirt road, is now clear. I walked down from Moutero to Panormos yesterday and it’s fine; just at the bottom of the hill after emerging from the forest (where my friend Jessica found a Birdsnest Orchid – we put branches round it to protect it) the grass is rather long. I’ll get that cleared next Sunday. After that, we’ll tackle Djilili, which again, is overgrown. After that, I was hoping to clear an old trail from Ag Marina spring up to Palouki.
Out and about, I found a Bumble Bee orchid, amongst others. 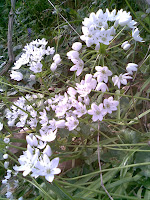 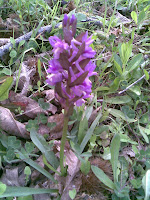 I’d just like to wish all the Skopelos walking fans and those of you who plan to visit in 2009 a Very Merry Christmas and a Happy New Year.
Heather