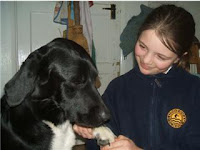 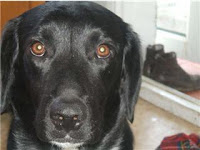 Dear Daisy, would you mind very much if I brought home this lovely boy dog called Lucky? He is very well trained and apart from a small matter of chasing sheep – which we won’t concern ourselves with just at this moment – I think he would be an ideal addition to our household. He is black with a bit of white, he is very obedient, affectionate and very very intelligent, picking up everything you say and I think he would fit in very well. At the moment he lives in the house of Lucy and Fossie with Harry, a West Highland Terrier , and Bernard, a beautiful golden Labrador puppy (about 18 weeks old I think) as well as five cats, with whom he gets on very well. So, when you discuss this with Sissy you can let her know that he is cat trained to purrfection (in fact he could assist you in tipping the scales in your relations with Sissy – you know what I mean?).

There would be no conflict of interest with you because where you like a gentle stroll Lucky loves a big bouncing run – he could run behind the car round and round Ngataringa, no? Again, where you don’t care for wet grass Lucky loves nothing more than to run through bush and nettles and the stickier the better for him to bring home presents for his carers. He is very like you in that he too likes to lie just where causes most problem for passing humans. He wouldn’t even compete for your food since he has dried food and any forage that the cats bring in (apart from gallbladders, which he does not care for).

Finally, he is in a bit of trouble just now because he was found playing with – well scaring to death – some neighboring farmers sheep (you’d think those sheep would know better and keep out of his way!. So he may have to wear an electric collar – and if that does not work then he may be shot. I, personally, think we should apply for deportation – like they used to do to criminals – and send him to new Zealand. They like hard luck cases there – although they are not to keen on introduced species and so Lucky may have to disguise himself as a Kiwi for the first few months till the local animals get used to him – and I think he would fit right into our household and to NZ in general. What do you think? Will you discuss it with Sissy and get back to me. Time is of the essence – the electric collar beckons. Love. Your human, Ann.