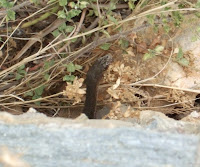 After planning to get the majority of the updates in place over the Christmas period, due to computer incompatibility problems, it wasn’t possible. I’ve been back 2 weeks and had further computer problems which I think are now resolved. It’s alarming just how many changes have taken place since the last publication: the old brick kiln has gone, a huge bulldozed road nearly to the lighthouse in Glossa has annihilated the track, other paths have just disappeared. For years I would walk around the island, going back time and time again and finding the paths still open. It’s a totally different story now. If I don’t go out with my clippers on a regular basis, in just six months, you wouldn’t even know a path had existed in some places.
I have a meeting with the forestry people tomorrow and hope they will remove all the fallen trees below Ag Reginos in Pirgos so that the calderimi can once again be used.