Please welcome David from Spain and Jenna from the USA. We’ve been working for several days now, joined on Saturday by local Emmanuel Paleologos, on the trail between the heliport and Prof. Ilias, Kokola. Please be careful at a small holding near the water tank at the Prof. Ilias end as there are some free and rather aggressive dogs. 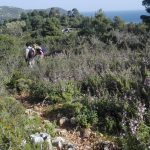 Over the years, I’ve discovered some 17 different varieties of orchids and so it’s great when I find something new. This Orphrys tenthredinifera is a real beauty.

Sam and Monique were excellent volunteers and we were able to clear all of section 49 of walk 11, although we did have to make our own exit/entrance at the high end of the trail. A few days off now until the next volunteers arrive. 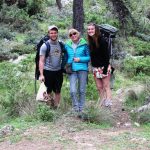 I’m delighted that we’ve started work after, what seemed, a very long winter. The trails have got off lightly due to mild weather conditions. Again, I have Workaway volunteers to help me. Our first of the season are Monique and Sam from Canada and they are being hosted by the ever generous Regas House hotel (Spirou Group).

I selected a trail that was easy to reach and one that I have in fact never cleared! I’d forgotten how beautiful it is. It’s part of Walk no. 11 where it cuts the corner from just beyond Stavrodromo and Potami. I believe this partial calderimi was created as a way to the Potami spring. Sadly, the calderimi portion that existed in the actual Potami valley as been asphalted over. As usual, what remains is well placed with shade. 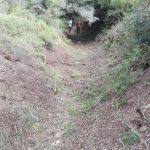 Workaway.net hasn’t disappointed and teams for the spring are being assembled. Volunteers from Northern Ireland, the USA, Canada, Spain, Germany and the UK have been booked in and I can’t wait to get started again around 12 March.  I’m also excited about the prospect of new pictorial signs for the Retsina Trail and the Monk’s Trail. An app is also in the pipeline that will enable hikers to buy single hikes for use with their smart phone.

Apart from tidying up existing trails, we hope to reopen an old section of trail from Glossa village up to TACAN (it then continues down to Taxiarkis), the trail to the tower at Loutsa and the continuation of the trail to Kalogeros.

If you notice any particularly overgrown trails, please let us know and we’ll do our best to get them cleared. 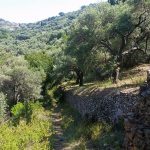 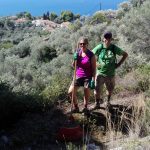 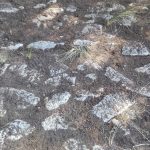 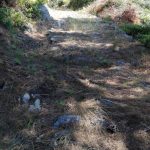 Before setting off, remember to take water with you. Check with the Skopelos Trails guide book if there’s a spring enroute from which you can replenish your water bottle. There’s also a list of all the springs across the island on page 11. If the water is running, it will be safe to drink 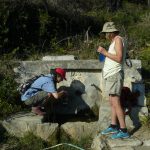 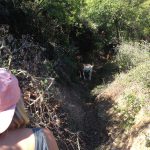 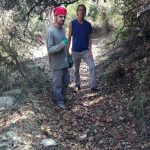 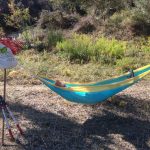 I was recently invited to a wonderful, gastronomic evening, together with volunteers Hamish, Flaminia and Emilie,(Sophia from Del Sol was also there). This was a personal ‘thank you’ from Sofia for the work that Skopelos Trails does. Thank YOU Sofia. 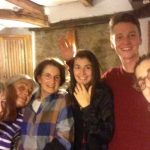 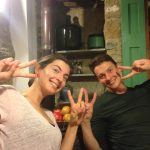