We continue to keep busy. The Retsina Trail from Diakopi, up to Ag Georgos (Anania hill) and back down to Nancy, Pirgos, has been cleaned. Many thanks to volunteers Rory from Ireland, Allie from Canada plus Austin and Polly from Australia, for all the hard work.

We also spent two days reopening a blocked portion of trail from Vromoneri spring near Potami up to Raches.

There’s a route change in Kambos too on the Panormos walk. Note that the Kimissia trail up to Pirgos now starts earlier via a new dirt road. We’ve put signs up.

Maintenance is being carried out and we’ve just completed the portion that runs between Diakopi and Pirgos (near Anania). 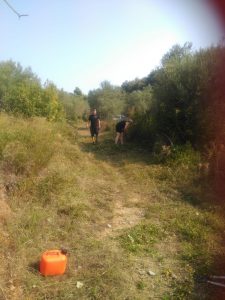 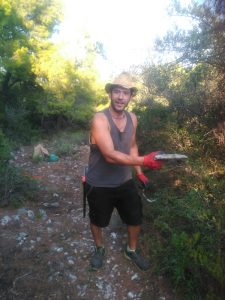 It’s been a very busy start to the clearing season with volunteers from Majorca, Spain, Australia and Germany already come and gone and now from Ireland and Canada. A new piece of equipment has been purchased, a hedge trimmer and it’s proving very successful. So far, we’ve carried out maintenance at Kimissia, on the Panormos trail in the Potami area, cleared a thicket of brambles below Raches and are now widening the trail that leads from Diakopi up towards Pirgos (part of the Retsina Trail).

I was unable to get a hotel room at the beginning of the season and I can’t thank the Bonini/Kosma family enough for their generosity in allowing the volunteers to stay at their town house. It was a godsend and works very well as it’s located close to my house.

I’ve also had dialogue with the Forestry department and shown their agricultural policeman (agrofilikas) several problem areas to see if we can take some kind of official action. 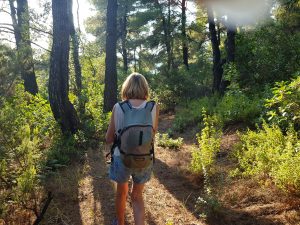 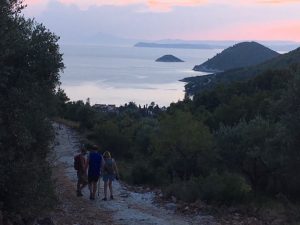 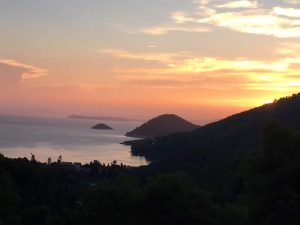 For those of you who think they know Skopelos, this is an area you may not have stumbled across. I remember it as being a small footpath beside a narrow brook that lead to the spring of Lalaria. I couldn’t believe the change due to the floods of 3 years ago. Now we have a wide canyon, forged by the water pouring down from Palouki. The Spring has gone. We are left with beautiful plane trees lining a dry (at the moment) river bed, which ends at a sheer rock face with a natural spring, the waters of which are being harnessed by someone to supply water to their nearby vegetable garden. This route can be used to get further up the Old Stafilos Road. See my sketch map page 19 of the guide book and page 21, image 4. 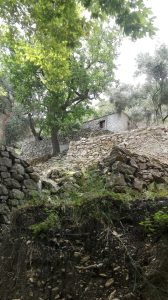 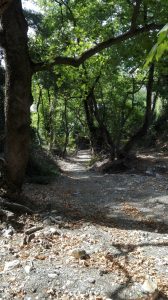 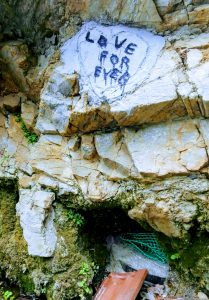 Skopelos Trails is now an official non-profit organisation. We are in the process of opening a bank account should you wish to make a donation. We have also made our first official complaint to the council regarding fenced areas on the trails. They are obliged to look into the matter and discuss at the next council meeting. In the meantime, no response to my request to take one of the council rooms on the port; offered several years ago when I wasn’t able to accept due to lack of support (which I now have).

We are still working a few hours a day at Kimissia, trying to create an extreme cycle route which will also help the walker as it entails widening the trail in general.

At last this route is open. It’s 9km and took us 3 hours to walk. It’s not in the Skopelos Trails book but can be downloaded via the Map App. 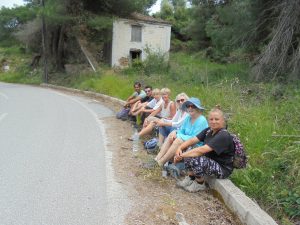 It’s taken over three months to complete and there is still a bit of work to do. Please note that just beyond the Prof. Ilias water tank there are some dogs, one of which is free. A bit of asphalt to walk once you get to the heliport area/Petraki cross roads but some lovely views over to Evia. It’s then down into the coolness of the forest and over our bridge. Going down Kimissia there’s an illegal fence across the trail but you can open it.

I’d like to thank all the volunteers who have worked on this route; David, Jenna, Nikos, Che, Hannah, Alexa, Dee, Jackie, Clive, Amy, Pamela and our chainsaw extraordinaire Manolis Palaiologos.

Since introducing the Map App, several people have asked ‘Why only android? Why not Apple? Well, I didn’t know, so I asked the app developer and this is his answer.

In order to develop for Apple, you have to pay royalties. For android, there are no costs. Also I don’t personally have an Apple laptop. If you have an Apple application, it can’t be free.

So there’s your answer.

When writing about blocked trails, it’s usually regarding a mean land owner but this time, we are the culprits!! Whilst trying to cut down and remove a tree and use it as a bridge in the remma on the Kimissia trail, everything went a bit wrong. So for the moment, the trail is blocked although it is possible to crawl under the foliage. We’ll get back there asap.

We’ve been working very hard to get this trail open and I guess you can say that it now is, although there are still a few finishing touches to be made. You have to know that there are two illegal fences across it on the Kambos side but they can be opened. The stream bed (remma) is a bit difficult to cross but we will sort that out soon. From the remma down to Kambos and then Episcopi (Ring Road) the length is 2.23km. I’ll be posting a complete length as soon as I’ve GPSed it. 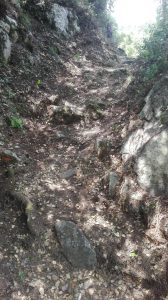 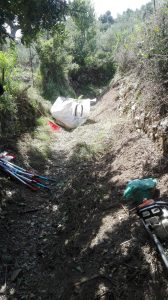 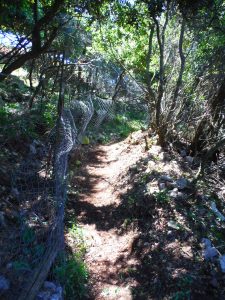 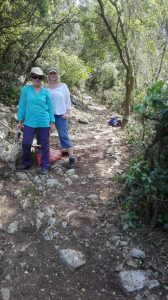