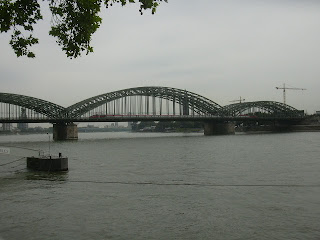 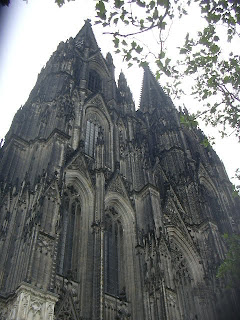 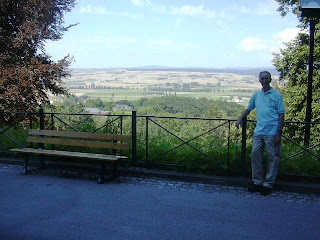 Hi everyone again. Well, what a journey from Coburg to Cologne. The day I decided to leave, Dad and I visited a local castle in the morning. We then tried to get some lunch, which took forever to find somewhere. When we did, the food was excellent and it was obvious how expensive everything had been at the festival – eg. beer had been €5 when normal price was €1.50! So it was after this meal and the two beers I had with it that I left Coburg in what I thought was the wrong direction: so I turned around. When it was obvious I was heading towards the old East Block border, I turned around again and ended up, an hour later back at the hotel. Hot, bothered and frustrated, I asked reception about the route and I had in fact been correct the first time! So on and on I went, on the phone to my friend in Cologne every hour. In the end, I slept in the car at a service station! Put towels up at the windows, seat back, earplugs in! Terrible night though because of the juggernaughts coming and going all flippin night. Set off at 6am but had to keep stopping cos I was so tired and also cos the lorry drivers were hasseling me cos I was driving too slow for them. I was on edge the whole time. Arrived in Cologne after 7 hours. Wolfgang came on the train to meet me where I’d parked and directed me to his place. But was I able to relax? Oh no. He decided I needed a city tour. Off we hurtled for the next 3 or so hours – leaving Yorgi outside the places of interested, tied to the nearest post. Not happy about that and at one point a lady and her grand-daughter were petting him as we emerged from the cathedral. She said they thought he’d been abandoned and were thinking of taking him!!!!!
So, after the city tour, was I able to go and relax? No again. It was out for a meal of sushi (which I had never had before and couldn’t eat) with rice wine with salt (which did pass my lips) and after that a beer at Wolfgang’s local watering hole! So, after that dear friends, was I able to go and relax? Thank God, yes! And it was in a lovely, comfortable bed.
Today has been more relaxed but I think it will have to be back on the road again tomorrow BUT NOT ON AN AUTOBAHN. I just can’t hack it. Don’t care if it takes twice as long. The hassel from THOSE BASTARDS just isn’t worth it.
Cologne is a beautiful place with a fantastic atmosphere and Wolfgang is very informative about the history of the place. He even tests me to make sure I’ve been listening. He is a teacher after all! Yorgi, by the way is fine and has taken to city life rather well.
In the meantime, back in Skopelos, my housesitter has had to return to the States as her father has had a mild stroke. Luckily I have good neighbours who are able to look after the cats.
So, as they say, that’s all folks!