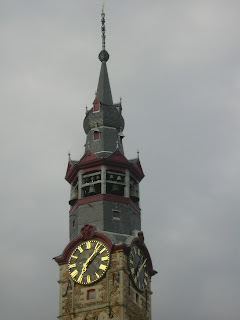 I am writing this from the comfort of my father’s bungerlow!
After saying goodbye to Wolfgang, it was a pleasant ‘A’ road drive towards Bruxelles. Everytime I asked for directions, saying I didn’t want to use the motorway, people would scratch their heads and say they had no idea how I would get there! Looking at the map, I headed for a place called Saint Truiden. It turned out to be a beautiful, cobble streeted town with a huge church in the central square. What’s more, on the hour, the bells didn’t just chime, they played It’s Now or Never, followed by an hour of other popular tunes! Also, after checking into the only hotel, I noticed I was in Belgium, not Holland! Later, relaxing at a bar in the square, it was exciting to notice a selection of 24 different beers on the menu. I sampled only one, which went straight to my tired head.

The following morning I set off to find a vet. UK laws dictate that a pet has to see a vet not less than 24 hours and not more than 48 hours prior to departure. I had only just found out that I was only a couple of hours from Ostende so was pleasantly surprised when the vet asked me what date and time I wanted her to put on Yorgi’s passport. I’d already heard from others how flexible European vets are regarding this point. Anyway, after this formality had been completed it was back on the road. I was dreading the next bit as there was no other way than by motorway. Then the heavens opened. Visibility was down to practically zero. This was good, as it made all the traffic slow down to my speed! The E40 is rather a nice motorway in fact because it doesn’t seem to be used by trucks.

At the port it took them one minute to process me and over half an hour for Yorgi. On the ticket (which cost an extra €25) it had in big letters PET. On the mirror I had to hang an orange sign with a picture of a dog on it and on the windscreen a flurescent sticker with another picture of a dog on it, in case there was any doubt. The crossing was very smooth and took two hours including a delay.

Once on UK soil, I promptly got lost! But never mind, the sky was blue and it was a very pleasant evening.