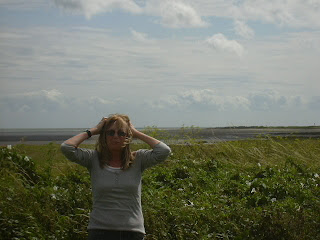 Another weekend by the coast, this time at Herne Bay. Dad had a gig there on Saturday and it just so happens I have a cousin who lives there so we made a long weekend of it. I was able to take Yorgi for a lovely walk along Pegwell Bay. Bit blowy but the rain held off at least.
Have been looking at the various options open to me regarding the route back to Greece. Have an invitation to stay with friends in Vienna but that would mean dropping down through the old Yugoslavia to Soloniki and I haven’t heard one person say that would be a good idea. So … I think it’s going to be France, Switzerland and Italy. Sad not to revisit the Bremmer Pass, my favourite bit on the way to UK but looking forward to finding something equally as good on the way back. Any suggestions would be gratefully received!