My friend Pam Batters came all the way from Australia to help me clear paths! We spent a couple of days working and now the route from the Djilili spring to the Glysteri road is now open. It was a jungle. Matters weren’t helped because the workers who had made the ‘new’ path had blocked the valley route entrance. Also worth mentioning is the fact that Spiro Kosma has opened his fences. He now has self-closing gates using old batteries as weights. This is to keep the free Fallow Deer in their enclosure. He changes their enclosure only during period end of April/beginning of May when they shead their antlers, which he then collects. 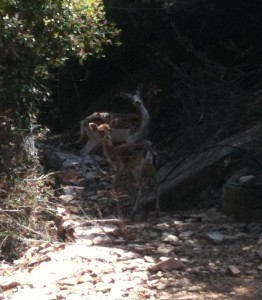 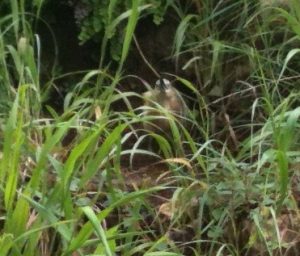 Should you be walking the dog, please keep on a lead when entering the enclosure.

Down at the spring, we had the privilege of observing a Bittern. It was just sitting on the spring..

We also cleared a small portion of track in Potami. It’s the bit that cuts off the corner of Diakopi.