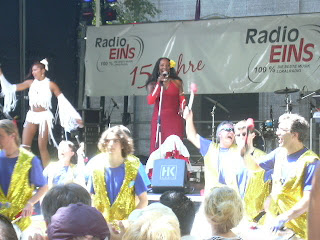 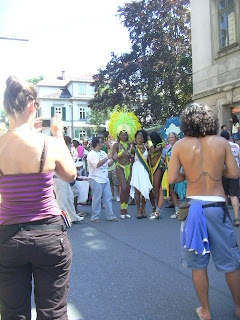 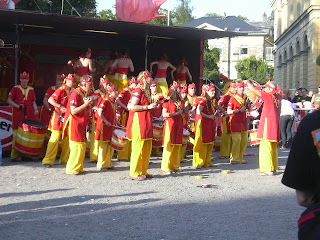 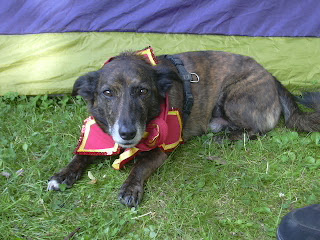 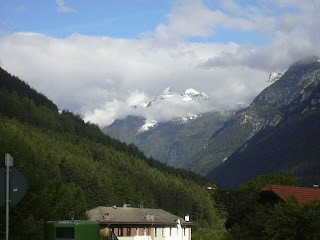 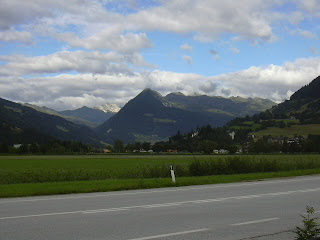 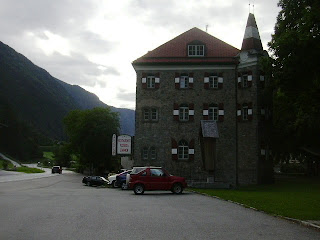 Left is where we stayed in the Bremmer pass. I can recommend it.

Other images of scenes along the way in the pass. 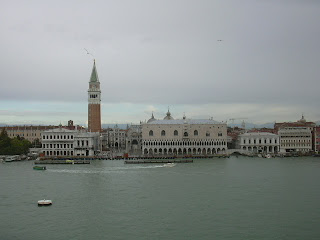 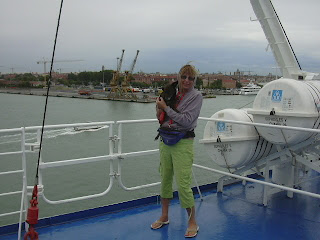 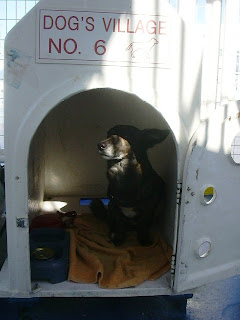 Here is Yorgi’s house on the ferry from Greece to Italy. Later, he refused to use it and ended up curled up in a corner of the pen – opposite to where the two labs were.

Next one, arriving in Venice.

Hi everyone from Coburg, Germany. I made it eventually after two days solid driving.
The ferry to Venice was fine although poor Yorgi had to spend his time in a Doggie Area on deck together with two other large dogs, one of which kept eating his food! It rained during the night so even though the area was covered, as soon as I stept outside in the morning, above the howling wind, I also heard another howling. I couldn´t get up on deck quick enough! There he was, curled up in a corner, wet and abandoned!
Anyway, once off the ferry in Venice, all the car drivers had to wait on the port for the trucks to unload. Took at least half an hour, so good job it wasn´t raining hard. I´d shared my cabin with a German lady who made the trip often, so I followed her out of the port area and onto the chockerblock motorway – bit different to Skopelos! Shortly afterwards, she was into the fast lane and away. I stayed in the slow lane, absolutely petrified. I haven´t got a kind word to say about the truck drivers. Not Italian ones, Austrian ones or German ones! They are all b######s! Just cos I don´t want to drive at over 100km hour, I got hassled. Sometimes though I had to use autobahn but it was a harrowing experience.
Through the Bremmer pass I took the B road. Stayed 3/4 way along in a lovely guesthouse beside a stream, surrounded both sides by mountains. Paid €40 including wine and an excellent breakfast. Can’t show you the photos as I can’t find the camera download cable. Might even have left it in Corfu which will be a right bummer if I have.
The drive along the rest of the pass was excellent. Mountains, streams, pastures, little wooden houses with flowers on the balconies – real chocolate-box scenes.
So eventually arriving late day before yesterday in Coburg, met up with dad who just happened to be waiting on the steps of the hotel, which by the way costs €85 a night! Stayed just the one night then tried to find something else. But the whole down and beyond is fully booked cos of the festival, so the hotel took pity on me and put me up in a staff room in the attic. It’s perfect but I can’t stay there any longer than one night as it’s unofficial. So goodness knows where I’m gonna sleep tonight – maybe in the car! Bit of a comedown after chocolate on the pillow accommodation.
Last night we waited for dad’s band to arrive but they didn’t make it as far as we know as their coach driver ran out of time.
The atmosphere last night in town was amazing. Bands playing, people everywhere having fun. Stalls with wine a food… Real carnival stuff. Pity you can’t be here too to share it. 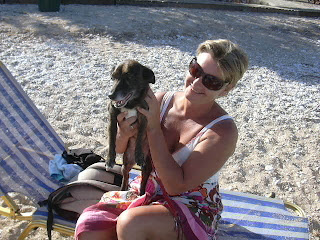 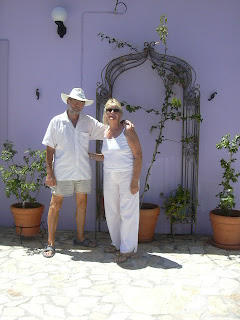 Hi everyone. Well I’ve had a fantastic time here on Corfu; thanks to Mike and Gilly. Here they are. Thanks very much indeed.
Yesterday I met up with Tina, who rented my spare bedroom ten years ago. She worked at La Costa in Skopelos for three summers and ended up marrying Dimitri, the guy who ran the crepes place next door (now the stationery shop). She lives full-time on Corfu now, with Dimitri and her daughter Nefeli.
I have a very early start tomorrow morning – up at 3.30 to leave at 4 for the 5.30 ferry to Venice. Have booked a cabin in case I can smuggle Yorgi. Otherwise, he’ll have to stay in a box and separated from me. 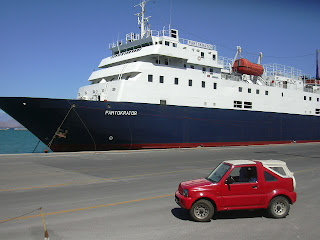 The drive from Parga to Iggoumenitsa took about an hour and I didn’t have to wait more than 10 minutes for the ferry. The crossing took just over an hour and Mike, Gilly’s husband was waiting for me at Corfu port. Was nursing a bit of a hangover as Eva and I went out Thursday night. We tried to find some Parga nightlife but the place seems to close up around 11pm! How did we still manage to drink too much wine then?

The drive from Corfu town to Mike and Gilly’s place in Episkepsi took about an hour and I just followed Mike. Their house is beautiful, with stunning views all around. In the evening we went out for a lovely meal at a beach taverna. By the way, it seems that when I publish these blogs, there are typos, which aren’t mine. Really weird. Thought I was being careless but have gone back to check several times and the typos are still coming up. 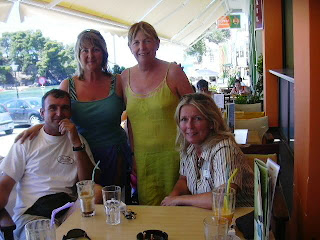 Hi everyone. Jesus I look terrible! So, here is part of the old team: Adoni, Lou, me and the lovely Eva – taken just before leaving Parga. Was absolutely fantastic to meet up with them but I won’t miss Eva’s Greek sofa-bed! Prompted me to get a back massage; the best I’ve ever had. So if you’re ever in Parga, go to Pure. It’s run by two sisters from Scotland!
Lou has no regrets regarding quitting TC’s and is making around the same money doing lots of little jobs and without the hassel or being on-call 24/7. Thank you very much Eva, for letting us stay with you and sorry I didn’t put the canapy back properly; just couldn’t manage the darn thing. 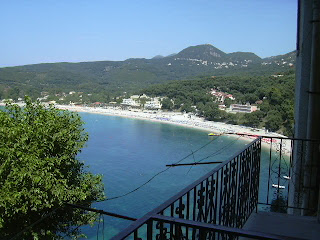 Eva’s apartment is situated in the Castro area of Parga, which is a maze of narrow streets around the old Venitian castle. Here is the view from her balcony, not that she has much time to appreciate it.
The place is busy with Italian and Scandi tourists and well as Brits and Greeks.
It’s still extremely hot but at least cooler than the temperatures experienced during the heat-waive.
Later today I’m meeting up with Louise who has quit Thomas Cook’s! 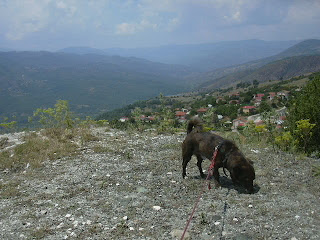 Here we are on top of the world, high in the Pindus mountains – the bit before it going REALLY BORING. A new highway is being constructed with some amazing bridges and tunnels but the construction is here and there, sort of littered all over the place. Pity I couldn’t some images of a half constructed bridge of an enormous valley but with an articulated truck in front and one up my arse, it wasn’t possible. 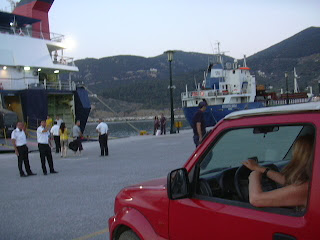 Hi everyone. Here we are getting on the ferry at Skopelos. Yorgi wasn’t too keen on the boat trip and settled just as we arrived. Stayed in the Jason overnight and set early Monday morning.
So now we are in Parga! Made it over in one day – not recommended really. The mountain road over the Pindos between Metzovo (sorry about spelling, forgot the map) was an ear-popping 88 km road somewhat like between Skopelos and Glossa but times that by 100 and add loads of articulated lorries and long tunnels and you have it.
Sleeping on Eva’s Greek canapy (very hard Greek sofa bed) until Friday, when I move on to stay with Gilly and Mike in Corfu.